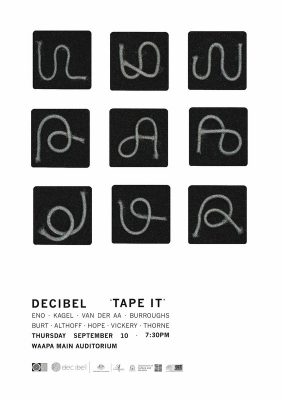 This program was also performed in Rottenberg, Germany, for SWR in 2012.

Tape It is a program where the focus is on works that use playback mechanisms as part of the score. Playing with tape has been interpreted to mean the many techniques of playback: reel to reel tape machines, portable cassette and CD players, tape decks, a turntable, and the latest in playback technology, laptop sound generation. All playback sounds have been recorded by the ensemble, and in some cases are created in real time. Playback is treated as a unique instrument in each piece and set according the acoustics of the space, player arrangement and performance requirements.