Decibel ScorePlayer
An application for iPad

The Decibel ScorePlayer is an iPad application designed to coordinate the reading of scores featuring predominantly graphic notation in rehearsal and performance. It features scrolling and ‘tracking’ modes for reading, and can receive drawing commands for realtime score generation.

The App ships with five included scores, a big clock countdown function and instructions for use.

You can use the Decibel Score Creator desktop application to create the unique score files used in the app, that can include multiple parts, audio, and instructions. Upload the file directly to the app on the iPad using AirDrop.

There is also a stand alone app that relates to the Decibel ScorePlayer, The Decibel Complete John Cage Variations ScorePlayer. This is also available on the App store

Fantastically straightforward and easy to use. 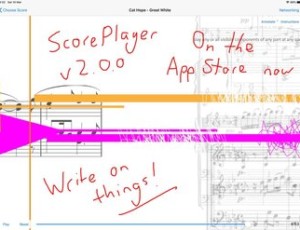 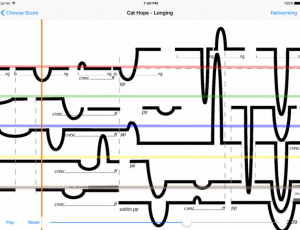 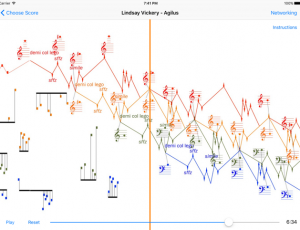 An important new release: a lot of changes under the hood to improve the general user experience. Most importantly though, it introduces the ability to write/annotate on scores: musicians can now make their own notes for rehearsal and performance purposes directly onto the score.

This latest point release fixes a regression in the “big clock” mode.

This release also sees some changes to the network protocol used between iPads, so for those connecting to the player via OSC (from a MaxMSP patch, for instance) you need to bump the protocol version used for the initial connection up to 16.

A new score has also been added: Cat Hope’s “Her Pockets Full of Inertia” for flute and playback, or flute and flute choir.

Cat Hope talking and demonstrating the Decibel ScorePlayer, including a performance of ‘MissFortune X’ (2012) by Decibel.

Cat Hope’s piece ‘The Lowest Drawer’ (2015): performance by Decibel synchronised with the score.

Here are a whole lot of iPads moving in a synchronised way!

If you are interested in setting this up, get in touch with us and we will give you a copy of the server files, and help with any set up as it requires a web server with php support.

The Decibel ScorePlayer app does not collect any personal data, and no personal data is sent from the app at any time.