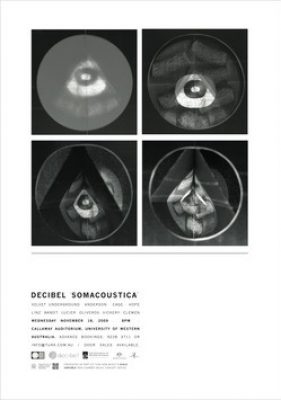 Somacoustica is a program of works investigating acoustic phenomena and it’s effect on the human body: vibrations, wave beats, performance processes and things that happen to the body when it shares space with sound. The program features open works from the late 19703 composers Ros Bandt and Rainer Linz (Vie), as well as recent works by Western Australians Cat Hope and a new commission for the full ensemble by Lindsay Vickery. Laurie Andersen’s work for a violinist in a door jamb, a listen and response work by Pauline Oliveros, Alvin Lucier’s works for instruments and sine tone generators, and John Cage’s piece for turntable styli – interpreted on the body – represent key pieces in the mediation of the body and sound. For Somacoustica John Cale’s unforgettable recitation of a Lou Reed text is presented in its original form on LP record as Decibel recreate the spirit of the Velvet Underground’s cornerstone work of 1968, The Gift.

The program was also presented at the Logos Foundation in Belgium and Germany, 2011, and as part of a Southwest tour in Western Australia in 2010.