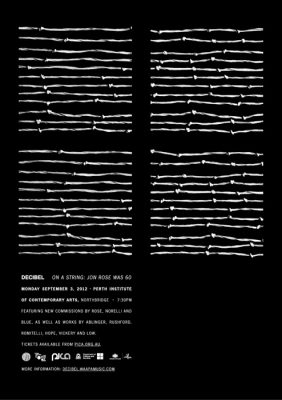 Music on a String: Jon Rose was 60

This concert is an important one for us. It celebrates the contribution of composer and performer Jon Rose, who has had an enormous impact on Australian experimental music. I’m sure Jon would appreciate us celebrating his work as a birthday gift to him, in the year after his 60th birthday. This program features a variety of approaches that honour Jon, from his influence on and direct involvement in the creation of new work, to the curation of a program that emphasizes the freedom his work has allowed us all. Jon Rose is a precious kind of artist.

His work is a reflection not only on music, but life itself. His virtuosity – as a performer but also as a generator of ideas, is difficult to surpass. The title of the program is a direct reference to Jon and his obsessive involvement with string instruments. But it is also a dedication to past, present and future Australian musical innovators in the world, who continue refuse to take anything for granted. We are fortunate to have the opportunity to feature performances by another Australian new music ensemble based in Melbourne, Golden Fur, as well as show works from our composition exchange program.

This concert features a new work by Golden Fur member, James Rushford. We continue our series of commissions for Perth songwriters as part of our program, and Lyndon Blue’s telematic link up with the Swan Bells celebrates a coming together of the diversity of music experience in Perth. We also debut our research into tablet computers as score players at this concert.