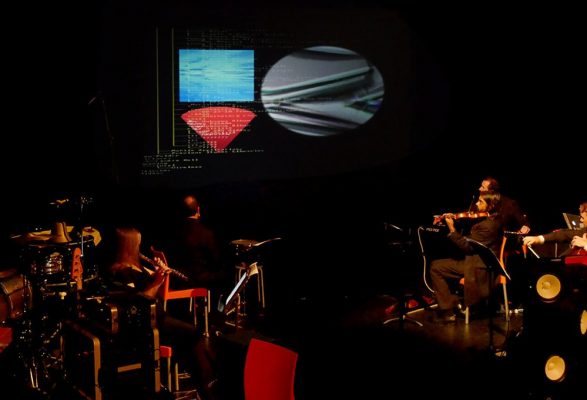 ​"Decibel blows the traditional concerto out of the water"

Listen to the performance in two parts, featuring interviews with the composers, on ABC Classic FM here and here.

A series of co-composed pieces for electronic soloist and Decibel.
The ‘concerto’ is one of the most familiar of classical music forms – a virtuosic solo performer in front of the orchestra. Decibel present a series of newly commissioned works composed for ensemble and electronic soloist, reworking the concept to put the spotlight on electronic instruments, with the ensemble taking on the role of the orchestra. The works feature soloists performing on instruments such as a digital Trautonium, laptop, mobile phones, tactile electronics, bass guitar, electric harp and a pile of speakers. Featuring guest artist Kouhei Harada (JP).

The concert will feature APRA AMC commissions, that include an hacked electronics work from Mark Oliveiro (NSW) and a trautonium work by Meg Travers (WA) and a live pick up work by Dan Thorpe (SA).
Other works include one for speakers from Johannes Mulder (WA), for Moog Synthesiser by Chris Tonkin (WA , for bass guitar from Pedro Alvarez (WA), a laptop concerto by Stuart James (WA)  and a new harp work funded by the Difficult Commission by Catherine Ashley (electric harp).