Lindsay Vickery was one of the emerging composers commissioned for the Western Australian Composers Project, that took place at the Perth Institute of Contemporary Arts, Perth, in 2013. Here, Artist director of Decibel Cat Hope asks a few questions about Lindsay’s work, Silent Revolution.

What was the main inspiration for your piece Silent Revolution?

I heard Chris Hedges talking about his book “Days of Destruction, Days of Revolt”. He details a number of places in the US which he describes as “sacrificial zones”, places that have essentially been abandoned by society and government. One of the places he visits is Camden New Jersey. It was once a hub of industry, but has become a no-go zone with large homeless camps, ruled by gangs, with a permanent underclass of unemployed.

I started collecting photographs of Camden and assembled them into collages – this is just something that I do from time to time – it wasn’t clear to me at first that this was the beginning of a new work. But I was very moved and horrified as well, by what Hedges had to say about Camden and about where industrialised societies are heading. I’m not sure what it means to make a piece of music about such an enormous problem – with so many forces at work – but on the other hand it is important, I think, to respond to issues like this, rather than just dealing with abstractions in music.

The Decibel Scoreplayer had just come out and although I had been making different kinds of computer scoreplayers for a few years, I hadn’t really explored what could be done with the scrolling score on the iPad. The collage that I made sort of gradually became the starting point for the Silent Revolution. I had been looking at the scores coming out of Laboratorie New Music and Bil Smith and was attracted by the idea of expanding the notion of a score beyond just notation. It seemed that the collage of Camden would fit the scrolling score format and I was interested in how photographic images might interact with notation.

There is a lot of pictorial material on the score that the musician does not ‘read’ as such, yet notation is often guided by it. What was your intention when you included it?

Well, as you know, composers do sometimes ask performers to play images as notation – like Fred Frith’s brick wall in Bricks for Six – but I was more interested in whether there is an interaction just because the image is next to the notation. As the work progressed the notation and the images began to interact more and more. It was a conscious decision – to allow the subject matter start to effect the music.
It’s an interesting question, whether it changes the meaning of the notation for the performers and also for the audience. Maybe it’s impossible to say, but I am going to run some experiments using eye-tracking equipment later this year, and that might at least reveal whether the performers look at the graphics at all and begin to answer the question about their impact.

You often use events as starting points for works. Do you develop a compositional approach based on the event, or does that evolve separately?

That’s true – but in the case of Silent Revolution (2013) the starting point emerged quite organically: I just suddenly realized that I was making a new piece and not just combining images. I can’t remember when the repeating pulse figure that reoccurs Silent Revolution developed in relation to the collages I was making. The scrolling score doesn’t lend itself to rhythmic material, but I want to see whether it was possible to use it as a means for creating very fluid polyrhythmic structures, I suppose a bit like Nancarrow’s piano rolls except with live musicians. My intention at first was to pursue this idea. 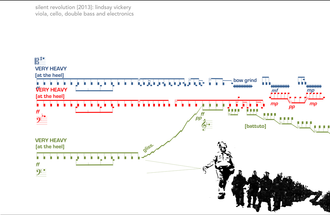 But there ended up being quite a range of notations in Silent Revolution: some of which is well defined in terms of pitch and pulse and other sections that are much less “semantic”. The piece builds up to a climax where the notation can only really be interpreted as regions of noise. Each player still reads a colour (red, green or blue) as their part but it is spread is greater of lesser densities across the whole spectrum. The image here was actually another, more abstract looking, collage that I made of Camden. 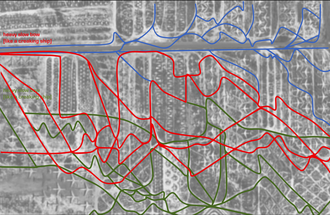 In fact the progression of the images – really drove the narrative in this piece rather than the other way around: from Camden, to abandoned factories, to Occupy Encampments, to Refugee Camps, to Beirut, to the “Boneyard” where millions of dollars of decommissioned planes rot and then the second Camden Collage. As Hedges points out these problems are not just America’s problems, there’s a lot wrong with where we are heading globally.

In this sense, the piece was a sort of diary of things I’d been reading and thinking about. Jeremy Scahill’s Dirty Wars had just come out and that contributed the drones that hover over the whole score for example.

The final images are from this extremely haunting “artist’s Impression” of a proposed WIPP (Waste Isolation Pilot Plant) where waste would be buried that is so toxic that it can basically never be dug up. These are real places: one in New Mexico was just in the papers because it’s leaking plutonium. Alan Weismann describes it in his book The World Without Us  as one of the few human relics that will remain in the distant future more or less permanently. Perhaps it’s a black view of the end point, or one of them, for industrialised societies, but it’s also a strangely calming view too – empty and silent. 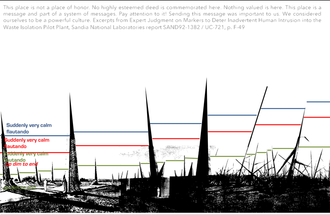 In 2013 you created a few scores that are a lot more ‘graphic’ than in the past. What was your inspiration of this direction?

I have veered off in a visual direction a few times before. I became very interested in projection of video as a score starting about 1998 when digital video and projection became more accessible. I guess this culminated in Fantastic Voyage (2002) a “score-film” using images from the Tissue Culture & Art group as a backdrop and template for improvisations by HEDKIKR with Darren Moore. But I moved away from this partly because my research focus shifted to nonlinear formal structures and at the beginning it seemed the best way to evaluate these was when performers were playing notated music.

But in 2009 I became interested in exploring continuously evolving textures (rather than block textures), still in the context of nonlinear structure. I made a piece called Transit of Venus (2009) where the notation for the three players was an evolving “continuum”, and scored it graphically. It was actually a transcription of drawing from my notebooks which were originally intended to be just an indication of how the notation would evolve. The continuum scrolls forward and backward in the score and the players are separately sent other parameters – pitch cells, articulation and dynamic contours which appear in other parts of the score. Because of this it is actually quite a challenge to read – I think if I was starting it again now that I’ve learned more tricks about animating graphics I would probably have approached it differently, maybe more prescriptively.

That year I also put together a performance of Cage’s Concert for Piano (1958) and that really had a big impact on me – the breadth of ideas about representing sound graphically in that work are really mindboggling and of course the notation itself is so beautiful and inspiring.
But you are right there was a shift towards a wider range of graphical approaches that started with a work I co-composed with you, The Talking Board (2011). Until that piece I hadn’t made scores that were so open to interpretation – I had mostly been interested in graphical notation as a necessary tool when traditional notation couldn’t achieve the required function. In fact that is still primarily my interest – several recent scores – Agilus, Mimoid, Symmetriad (2012)  and the inaudible becomes audible (2013) are basically a cross between a spectrogram and traditional notation. I really respond to the way the spectrogram represents the dynamism of sound. Both of those pieces were “scrolling” scores also made for the Decibel Scoreplayer and the spectrogram shows time proportionally so it is ideal for the scrolling format where the score moves at a regular speed.

I as a result of experience of making and playing The Talking Board I’ve become interested in creating a kind of continuum between graphics  and sound, so the inaudible, the notation for that work was sketched directly onto a spectrogram of an improvisation, and the electronic part consists of a sonification of the notation – so there is a kind of exchange between the visual and sonic representations.

The work I have just finished, Nature Forms I, explores the same idea from a different point – a score made from treated photographs of “natural” objects (trees, rocks, plants etc) which is sonified by musicians as well as electronically. I’ve become very interested in what these different forms of notation mean to the performer and the realization of the work. In Nature Forms I the computer “reads the score very literally – as though it were a spectrogram, whereas the three performers each read it differently: as though it were notation, tablature or a less specific aesthetic indication of what to play. I am going to track what each player is looking at in the score while they are playing using eye-tracking glasses and I suppose I hope that will reveal something about what performers draw on when they look at a score for different reasons.

Do you see a certain evolution in your works?

I do and I think that’s pretty normal (even it if takes you to some abnormal places). It does have some consequences though, I think it is sometimes hard to find the balance between exhausting all the implications of ideas – which could literally be infinite – and becoming locked into a certain way of working.