The Talking Board Project

The Talking Board Project #Db10at10

TheTalking Board is a truly collaborative work devised by Lindsay Vickery and Cat Hope with Decibel.

The piece uses an innovative notation system, where each player has their own “planchette” – a coloured circle enclosing the materials that they must perform. The four planchettes independent traverse the graphically notated score creating a progression of material for the performer’s to realise.

To date, the work has seen three versions – the first two using a collection images created and collected by Lindsay Vickery and Cat Hope, assembled in using the surrealist “exquisite corpse” technique (each person can only see fragments of the other’s images until they are all assembled). The images are joined and read using the planchette system. Location data from the movement of the planchettes is used to spatialise the sound during the performance. The score was read from a projection.
​
The third was as part of Sounding Art project in 2017, where an oil painting by Kevin Robertson was ‘read’ using the Talking Board technique. This time, the score was read ‘remotely’, and not from the projection as in earlier performances.

The term Talking Board is a generic name for the Ouija board a game invented by Hasbro Ltd that rapidly grew in the early 20th century into a favoured medium for supposedly contacting the dead. In our version the only “ghosts” are (hopefully) in the machine.

In 2019, Decibel celebrate ten years by revisiting extant works, and this includes a new Difficult Commission campaign to encourage new works for the Talking Board score format. These will be performed as part of the durational event Extended Play at the City Recital Hall in Sydney on August 31. New works by Leah Barclay, Kevin Robertson and Loren Holmes/Rosie Halsmith use the Talking Board score paradigm – an innovative, non linear approach to to reading graphic scores within the Decibel ScorePlayer. A work devised in collaboration with French music concrete artist Lionel Marchetti will also be featured, with the composer performing within the ensemble.
Program: 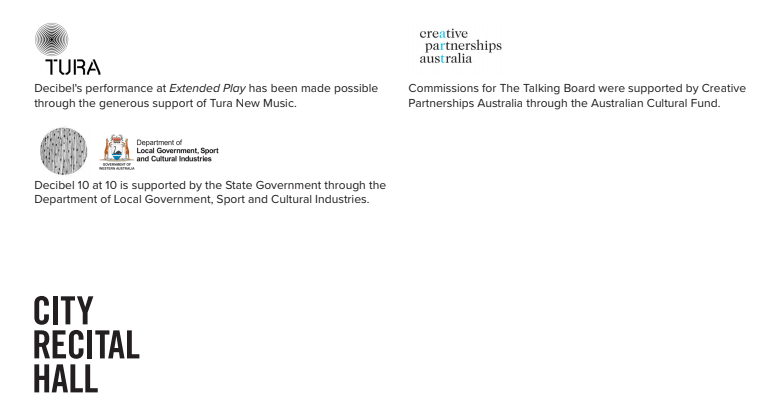