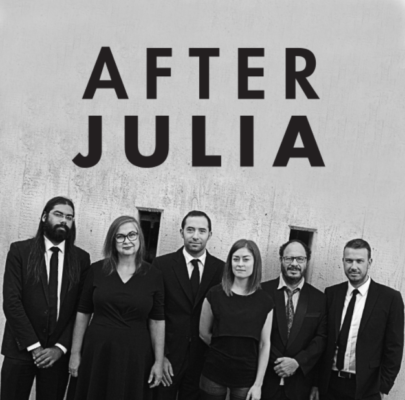 “an incisive example of music as social commentary” The West Australian.

After Julia is a concert of eight contemporary works by Australian women composers responding to Julia Gillard’s tenure as Australian Prime Minster. Decibel Artistic Director, Cat Hope, was inspired to pursue the project after circumstances around Gillard’s prime ministership exposed gender discrimination within politics and wider Australian society, causing her to reflect on the new music sector.
The broad collection of works includes a 6-girl choir, instructions from goldfish, spoken phrases turned into musical gestures, mouth organs and more.

You can listen to live recordings of the 2017 Brisbane concert, here.
You can hear an interview with Julian Day and Julia Gillard at the concert here.
​
The composers and works are as below: click on them to see a video of the premiere performance.
Michaela Davies – Goldfish Variation
Andrée Greenwell – Arrows I, II
Cat Hope –Tough It Out
Laura Jane Lowther – Loaded. [NSFW]
Cathy Milliken – Shifrorl
Kate Moore – Oil Drums
Gail Priest – Everything and Nothing
Thembi Soddell – Your sickness is felt in my body.

The premiere performance took place at the Eugene Goosens Hall, ABC Centre, Ultimo, Sydney with Julia Gillard in attendance (Lowther was premiered at the Perth concert  in 2015). It was presented by ABC Classic FM and Tura New Music as part of new music month.
It was broadcast live to air on ABC CLassica FM, New Music Up Late.

This tour is made possible by the WA Dept Culture and the Arts and Monash University.